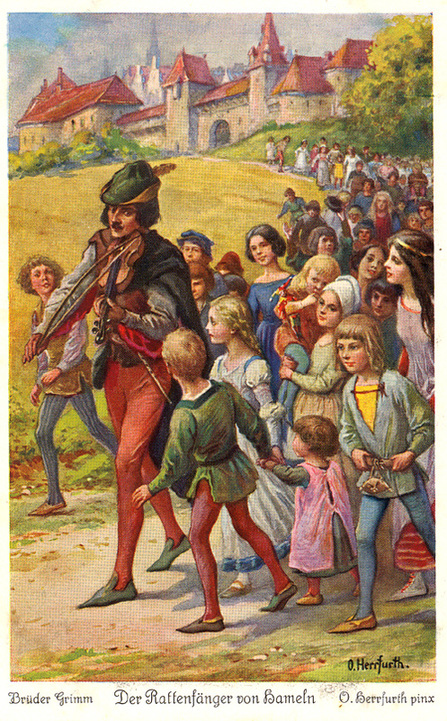 The Pied Piper of Hamelin

In the year 1284 a strange man came to Hamelin. He wore colourful clothes and a strange hat with a feather. At that time he citizens of Hamelin had a big problem. Their town was full of rats and mice. They ate all the food, made a lot of noise and troubled sleeping babies. The citizens tried to, but they were unable to do anything against this plague.
So the stranger went to the Mayor and said: “I can free your town of every single rat – for a fixed sum of money.” Of course the Mayor was happy and promised to pay him his fee. The stranger made a pipe and began to play. Soon all the rats and mice came running out of the houses and gathered around him. When he was sure that each and every one followed, he went out of the town straight into the River Weser where all of them plunged after him and drowned.
No the town was free of the little devils and all the people were really happy.
But as the Pied Piper asked for his money, they refused to pay him for such an easy job. So he left Hamelin in a bitter mood.
On the 26th of June in that year he returned, this time dressed as a hunter, with a wondrous red hat and a grim face. While the citizens were sitting in the church, he again sounded his pipe in the streets.
But this time children older than four came running out of their houses and started following the Pied Piper, dancing and shouting. He led them through the Easter Gate to a place far, far away. Only two children returned, one was blind and one was dumb. And one little boy returned to fetch his coat – and so escaped. The Mayor sent his men to look for the children and bring them back. But they couldn`t be found. 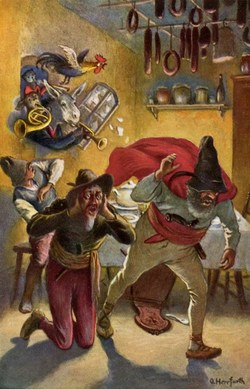 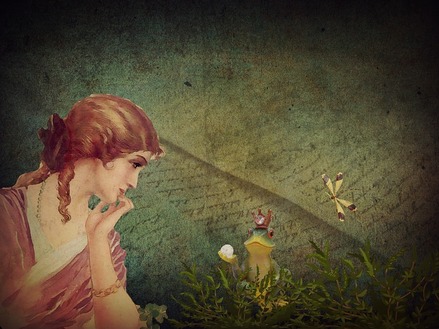 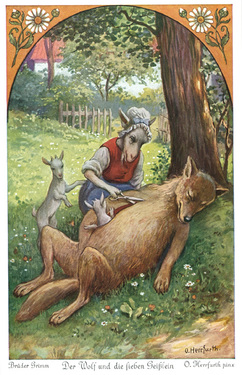 The Wolf and the Seven Young Kids (Grimm Brothers)
Once upon a time there was an old goat. She had seven little kids, and loved them very much. One day she wanted to go into the forest to get some food. She said: "Dear children, I have to go into the forest, be careful of the wolf. If he comes in, he will devour you all. You will know him by his rough voice and his black feet."
The kids said: "Dear mother, we will take good care of ourselves." So the old goat went on her way with an easy mind.
Soon somebody was knocking on the door and called: "Open the door, dear children, your mother is here. I`ve got a present for each of you." But the little kids recognized the rough voice and knew that it was the wolf.
"We will not open the door," they cried,  "you are not our mother. Our mother has got a soft voice, but your voice is rough, you are the wolf."
Then the wolf went away to buy some chalk. After eating the chalk his voice was soft. He went back to the goat`s house, knocked on the door again, and called, "Open the door, dear children, your mother is here. I`ve got a present for each of you."
But the wolf had laid his black paws against the window, and the children saw them and cried: "We will not open the door, our mother has no black feet like you. You are the wolf."
Then the wolf went to a baker and said: "I have hurt my feet. Put some dough over them for me. And when the baker had done this, he ran to the miller and said: “Put some white flour over my feet." The miller thought to himself, the wolf wants to deceive someone, and refused, but the wolf said: "If you will not do this, I will devour you." Then he was afraid, and made his paws white for him.
He went to the young kids for the third time, knocked on the door and said: "Open the door for me, little children, your dear mother is back again. I`ve got a present for each of you."
The little kids shouted: "First show us your paws that we may see that you are our dear little mother."
When the kids saw that they were white, they believed that all he said was true, and opened the door. They saw the wolf, and were so terrified! The kids wanted to hide themselves. One sprang under the table, the second into the bed, the third into the stove, the fourth into the kitchen, the fifth into the cupboard, the sixth under the washing-bowl, and the seventh into the clock-case. But the wolf found them all, and one after the other he devoured quickly. Only the youngest who was in the clock-case, he could not find. Later he laid himself down under a tree, and began to sleep.
Soon afterwards the old goat came home again from the forest. And what did she see? The house-door stood wide open. The table and all the chairs were thrown down, the washing-bowl lay broken to pieces, and the quilts and pillows were pulled off the bed. She searched for her children, she couldn`t find them. She called one after another by name, but in vain.
At last, when she came to the youngest, a soft voice cried: "Dear Mother, I am in the clock-case." She took her youngest kid out, and it told her that the wolf had come and had eaten all the others. Then you may imagine how sad she was and how she cried over her poor children.
In her grief she went out, and the youngest kid ran with her. When they came to the meadow, they saw the wolf laying by a tree and snoring very loud. She looked at him on every side and saw that something was moving and struggling in his full belly.
Then the old goat told her youngest kid to run home and fetch scissors, needle and thread. She cut the sleeping wolf`s stomach, and all her six little kids sprang out one after another. They were all still alive!
It was such a joy! They embraced their dear mother, and jumped up high. The mother, however, said: "Now look for some big stones, and we will fill the wolf's stomach with them while he is still asleep." And so they put as many stones into his stomach as they could get in, and the mother sewed him up again in the greatest haste, so that he was not aware of anything.
When the wolf woke up, he got on his legs, and as the stones in his stomach made him very thirsty, he wanted to go to a well to drink. But when he began to walk and move about, the stones in his stomach knocked against each other and rattled. He shouted:
"What rumbles and tumbles
Against my poor bones?
I thought 'twas six kids,
But it feels like big stones."
And when he got to the well to drink, the heavy stones made him fall in, and he had to drown miserably.
When the seven kids saw that, they came running to the spot and cried: "The wolf is dead, the wolf is dead," and danced for joy round about the well with their mother.
(Translated by Johann, Martin, Mike)
Zur Bearbeitung hier klicken